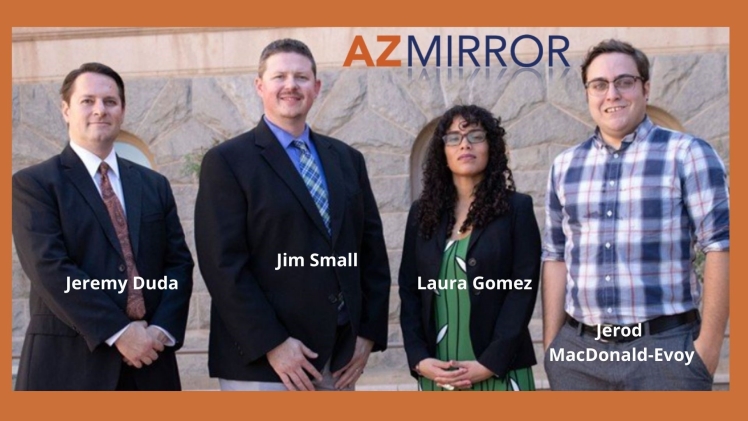 “Fake News” Lowers Trust In Mainstream Media” was the headline of a startling study recently released by Rutgers-led research study.  The researchers defined fake news as fabricated information that looks like news content but lacks the editorial standards and practices of legitimate journalism. The net result is only 29% of American say they trust the current news sources for truthful information.  However, are more sinister forces at work behind the market flood of fake news?

Recently, what some consider akin to a criminal cabal of misinformation and psychological warfare operation, a political cover operation was exposed for actually being “Fake-Fake News”. This operation and one of its political operating units called “the Arizona Mirror” recently came to national prominence in light of the massive election audit taking place in Maricopa County, Arizona.  This coincides with the world now understanding fake news is fabricated information, but the extra “fake” in this particular operation is not one of the participants are actually bona fide news reporters or journalists, but rather blathering political piffle from bullies beating Americans over the head with putrid political bunkum.  This cabal with fake correspondent credentials generating fake news is actually a very sophisticated operation to launder misinformation and psychological warfare stories though what is seemingly, to those the public, a legitimate news source.

OPERATING IN 20 US CITIES – UNCHECKED

The Arizona Mirror sounds like a legitimate Arizona news source or newspaper but in nature and operation it is a cover story for a very sophisticated 20 city hit-squad of hokum peddlers designed to assassinate the character of politicians, business leaders, free-thinkers and especially conservatives by publishing tripe, flapdoodle, stupidity, and smooth-talking tommyrot.  Under the illegitimate guise of both a 501 3c and a news organization, this cabal cobbles specious stories while it all together avoids paying taxes. This caustic cabal disguising its Democratic Party demagoguery uses its “press pass” as a way to get into event as “the press” when in fact they are not the Press.   This cabal’s charter is to push and impose extreme liberal views, which undermine American ethics, values and laws on to unsuspecting citizens and other legitimate news sources.

The dark money comes from a well-established, uber elite façade of democracy called the Hopewell Fund. In turn the Hopewell Fund, is a part of the massive, left-of-center “dark money” entity called. Arabella Advisors. In turn Arabella, owns, funds, and operates the States Newsroom, parent entity of Arizona Mirror. States Newsroom employs more than 78 factitious full-time editors, and imitative reporters in 20 states across the country.  Hopewell donates to far left-of-center organizations including abortion providers and manages a number of left-of-center single-issue advocacy groups, including the Economic Security Project and pro-Obamacare Get America Covered. In addition to the Arizona Mirror, Hopewell reports trade names of other news entities it controls as the Florida Phoenix, Nevada Current, and Virginia Mercury. In short, the funding money comes directly from George Soros, the organizations he both founded and supports such as Open Society Foundations, W.K. Kellogg Foundation, and the Democracy Alliance. Dark money earmarked for dubious detrimental deeds on American democracy.

As part of the sham guise of being a legitimate 501 3c, even though it is illegal to do what they do politically and remain and 501 3c, this operation takes aim at anything conservative.  Many have called for these entities and their makeup should be investigated by the Department of Justice. The only thing truthful about being a “charity” is the fact the Arizona Mirror and the other 19 cities who have these covert political operations posing as reporters and journalists is they are the “charity” beneficiaries drafting from a $100 million-dollar annual grant, designed to oppose anything decidedly American. For example, some of their most recent headlines of “reporting”:

It is alarming this democratic party covert operation is allowed to operate in 20 states, yet everyone ignores it is just a cover story for character and political assignations.  Rutgers had it right in their headline “Fake News” Lowers Trust in Mainstream Media Across Party Lines” and it seems this particular cabal of corpulent corruption accomplices don’t care what the public thinks because their political agenda comes first and foremost.  The only thing mainstream about the Arizona Mirror and it’s cos-play reporters is the harmful hate filled information heroin they peddle to the American public.
sisidunia.com is the best entertainment website in the word