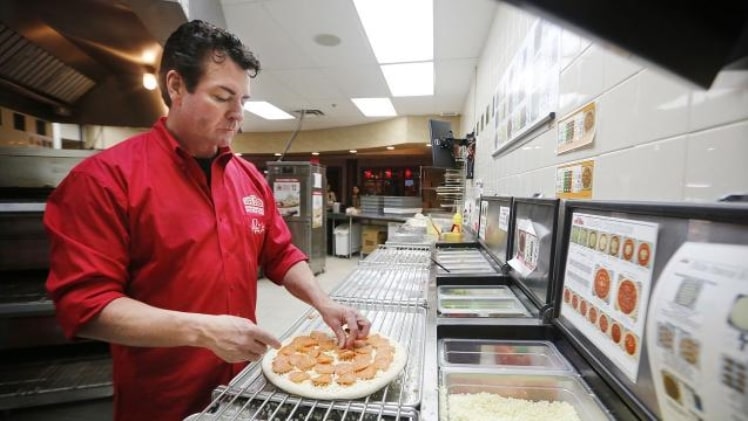 Papa John’s has become one of the most well-known pizza chains, and its latest success is largely thanks to Rob Lynch. This gentleman took over as Papa John’s CEO in the summer of 2019, and when he took over, the restaurant was facing a revenue decline of 7%. By the third quarter of 2020, the chain had a 17% increase in revenue.

Lynch used various means to vault the struggling company into great success. These methods also helped him win Executive of the Year at the Dive Rewards 2020.

Rob Lynch Executive of the Year

Lynch’s approach to Papa John’s Management and his focus on menu innovation are two of the reasons why Rob Lynch won the title of Executive of the Year. When he became the new CEO, Papa John’s was facing controversy as well as revenue declines. On his first day of work, Rob Lynch began changing things for the better.

One improvement was to provide more support for franchisees. He personally spoke with franchise owners to find out their issues and concerns. He also provided more financial support, which helped franchise operators improve productivity and get through the pandemic.

Another big change that Lynch implemented was menu innovation. Previously, the pizza chain stuck with its original menu and did not add anything new or change any recipe. Lynch focused on new menu items, celebrity endorsements, and a new marketing strategy. The menu innovation was especially successful because it did not put any additional strain on franchise owners, as the preparation methods and ingredients were already in place, making for a seamless transition.

Lynch also focused on increasing delivery options and encouraging loyalty. The Papa Rewards loyalty program, in which you earn points for every dollar and get $10 to spend after earning 75 points, helped to attract millions of new customers.

Shaq on Board With New Papa John’s Team

One of Lynch’s successful strategies was to sign on a celebrity brand ambassador, Shaquille O’Neal. O’Neal also became an investor and a board member because he believed in the direction the chain was moving. To honor Shaq Papa John’s, the company introduced a new menu item known as the Shaq-a-Roni. The extra-large pizza consisted of extra pepperoni and extra cheese. It was cut into eight extra-large slices and was marketed as the perfect meal for tailgate parties and family dinners.

Following the success of the Shaq-a-Roni, Papa John’s continued to come up with new menu items. Some, such as the Papadia, were so popular that they became regular items on the menu. The Papadia is popular because it is a flatbread sandwich filled with delicious combinations such as Buffalo chicken, Philly cheesesteak, barbecue chicken bacon, and meatball pepperoni.

Along with traditional menu items, the menu also has frequent limited-time specialties. Bacon Mania was a recent marketing strategy, offering three bacon-filled menu items. The current specialty is the New York Style pizza, which is the chain’s version of the popular pizza found in the Big Apple. Thanks to Rob Lynch, Papa John’s is now the pizza chain that people choose, whether they are craving pizza, sandwiches, or wings.